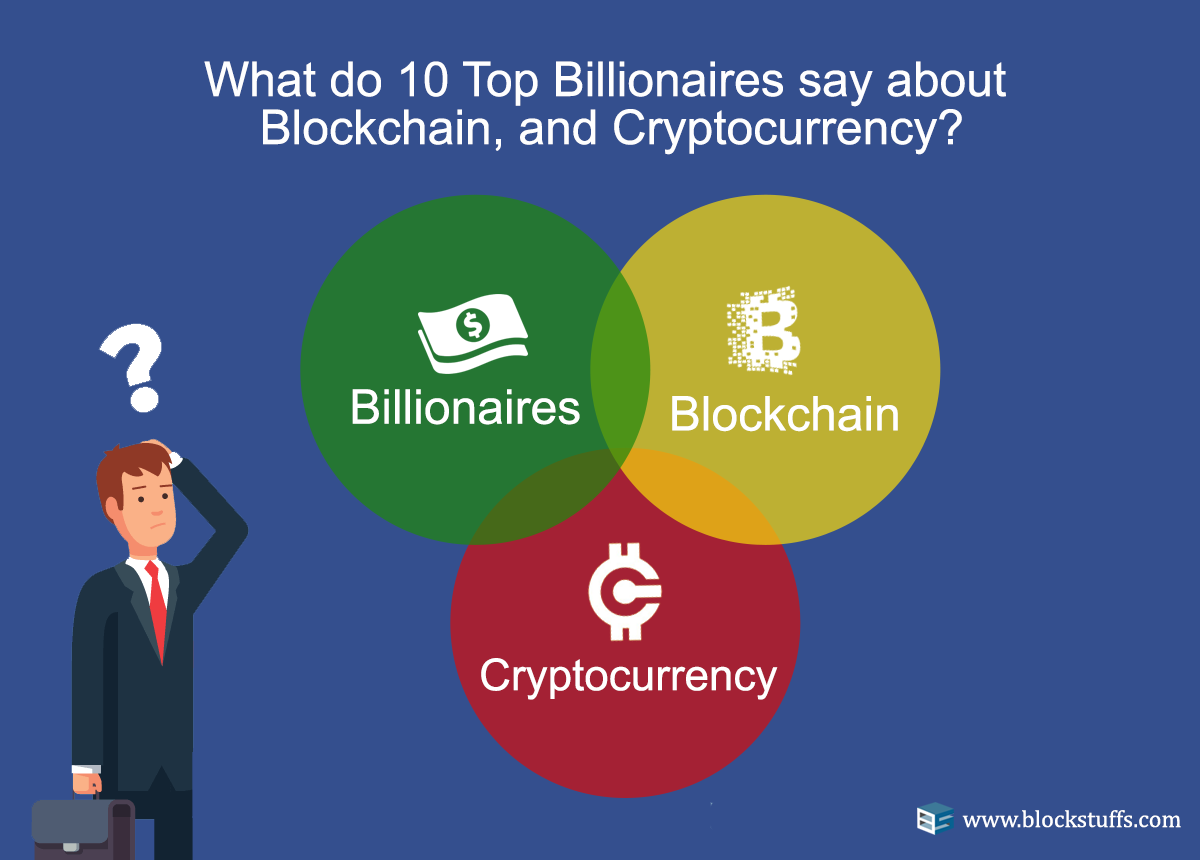 What do 10 Top Billionaires say about Blockchain, Bitcoin, and Cryptocurrency?

Jeff Bezos, founder, chairman, and CEO of Amazon was listed as the wealthiest man in the world by Forbes, beating the record of Bill Gates that was unbeatable since 2014. He is also the first centi-billionaire having the network of over $100 billion.

Though there were rumors about Amazon accepting the Bitcoin for its platform to this day, it hasn't happened yet. This is not the only rumor that was circulated that reflects the chances of Amazon accepting the cryptocurrency. James Altucher, an investor made a comment in a report last month stating the D-Day moment for Amazon and Bitcoin.

However, Amazon has been denying these rumors due to the majority of users using a debit card and credit card. Also, due to less demand for cryptocurrency, there have been no plans to accept the digital currency to date. Amazon adopts new products and services in the case they will be useful for the customers. As the cryptocurrency, Bitcoin and Blockchain technology is rapidly getting popular; we can certainly expect Amazon being a part as well in days to come.

Bill Gates, co-founder of Microsoft is worth $90B in 2018 with this, his position declined to world second richest man around the world.

Bill Gates was very optimistic about Bitcoin in 2014. He believed in the efficient benefits of the Bitcoin transactions. In an interview to Bloomberg TV, he referred Bitcoin as better than any currency.

However, in an ask me anything session on Reddit, he linked the anonymity of digital currencies with terrorist funding and money laundering. He also believes anonymity,  one of the primary features of cryptocurrency is not good for holding any transaction. He even referred crypto-currencies to be the cause of death of people as these days, digital currencies like Bitcoin are used for trading of illegal drugs like synthetic Opioid Fentanyl. He further adds the speculative wave around the Initial Coin Offerings and cryptocurrencies is extremely risky on the long run. He claims Bitcoin is one of the speculative currencies and is even willing to bet against its success.

Although he has been cynical about Bitcoin, he seems to be interested in Blockchain, a technology on top of which Bitcoin runs. He is optimistic about this digital ledger where all the transactions are shared and verified. Also, Bill and Melinda's foundation gave $100,000 as a grant to Bitsko, a company based on Blockchain in 2015.

He also made positive comments on the underlying technology rather than the Bitcoin itself. The Bill and Melinda Gates Foundation released software along with Ripple, for building cheap financial service infrastructure for the developing countries.

Warren Buffett, also known as the “Oracle of Omaha”, is worth $83 Billion and holds the third position among the wealthiest man in the world in 2018. He is considered the most popular American investor who owns more than 60 companies including the battery maker Duracell, insurer Geico and restaurant chain Dairy Queen.

He doesn't seem to be very fond of Bitcoin and cryptocurrency. He also constantly gets dragged into the topic of discussions due to his controversial statements related to cryptocurrency and Bitcoin. At Berkshire Hathaway’s 2018 annual shareholder meeting, he defined cryptocurrency as a rat poison squared.

He refers Bitcoin itself is creating nothing. He has constantly been arguing about the investment in Bitcoin as a gamble. As Bitcoin investors have to wait for someone to pay more price than today’s value, he doesn't consider it as an investment. He has even sworn about never buying a Bitcoin again. He refers to Bitcoin as a mirage and warns the investors to stay away from it. He also has been warning the investors about the certainty of bad end of Bitcoin and other cryptocurrencies.

He has always been reluctant to invest in new technologies. He doesn't invest in the things that he doesn't understand and cryptocurrency seems to fall in this category. This has been considered as his major weakness since he missed an opportunity to invest in Google and Amazon.

Mark Zuckerberg, CEO, founder of Facebook is listed as the 5th wealthiest person in 2018 according to the Forbes. The net worth of Facebook is considered as $66 Billion in 2018.

Mark Zuckerberg believes in the power of Bitcoin to use it to improve the future of Facebook. The problem with the internet is that it is too centralized, he claims. He further interprets the solution to this is a decentralized power which puts more power on the people’s hand which matches the mission of Facebook, ‘Give people the power’.

He even stated that he would study the positive and negative aspects of these technologies deeply and apply the best of them in their services. Facebook has an intention to develop Blockchain technology but the purpose is still unclear. There have been several rumors about Facebook having its own cryptocurrency in the future. This is supposed to address the recent problems faced by Facebook to enhance people’s privacy.

Amancio Ortega, owner of Zara is one of the richest men in Europe and the 6th wealthiest in the world who is worth $70 B. One of the pioneers in fashion industry, he owns about 60% of Madrid-listed Inditex that has 8 brands altogether. He also has an investment in real estate in different places including Madrid, Barcelona, London, Chicago, Miami and New York. He has over 1500 stores in 70 countries and is dominant in Europe. In spite of being a billionaire, he lives a modest lifestyle. There has been no opinion of Amancio Ortega found on Bitcoin or Cryptocurrency. Still, he is one of the inspirations in the Business world.

Carlos Slim Helu is worth $67.1B and is the richest person in Mexico and also holds the position among the top 10 richest people in the world. He owns more than 200 companies and is best known for his control on America Movil, Latin America’s biggest mobile telecom firm. Besides this, he is also CEO of Telmex, Grupo Carso conglomerate company.  There has been no record of him as well being interested in Bitcoin, cryptocurrency and Blockchain technology.

Jack Ma, co-founder, and chairs of Alibaba Group is one of the richest men in Asia and is worth $39B in 2018.

Though Jack Ma has been paying attention to the cashless payment system, he is skeptical about Bitcoin and cryptocurrencies. He claims, with the implementation of cryptocurrency, the international rules on trade and finance will completely change and he doubts is the world is ready yet to embrace those changes.

Yet he believes, behind Bitcoin there is a very powerful technology. He further mentions Blockchain technology itself isn’t a bubble yet claims Bitcoin to be the one.

He is quite optimistic about the distributed ledger technology but does not rate digital currency at all. He believes that the underlying technology behind cryptocurrency holds huge promise and potential in the future. He states that Blockchain has a wider application and can be used to solve the issues related to data privacy, security, and sustainability. It only refers to tools and concepts for making money if only used with cryptocurrency.

Jack Ma believes in the security and anonymity solution provided by Blockchain technology, whose significance will continue to increase with the rise of global trade in the future. He says, the social network may not require Blockchain but the internet and finance industry should be turned to the Blockchain.

Alibaba has also been actively involved in research related to the Blockchain. Is the world leader to hold the most patents of Blockchain than any other company.

Further, Alibaba has launched a joint venture in Hong Kong that uses Blockchain technology for cross-border remittance service to transfer between Hong Kong and the Philippines. However, at the launch event hosted by Ant Financial, he advocated in favor of Blockchain and also cleared that the firm doesn't own a Bitcoin, and are likely to stay away from the asset class. He believes Blockchain technology could change the entire world beyond the people’s imagination.

Elon Musk, a tech billionaire and entrepreneur best known for founding and leading Tesla Motors and SpaceX,is worth 19.9 Billion in 2018. He is a serial entrepreneur and has been a part of Zip2, X.com, SpaceX, Tesla, SolarCity, Hyperloop, OpenAi, Neuralink and with flamethrowers.

There has also been a rumor about Elon Musk being Satoshi Nakamoto, the anonymous inventor of Bitcoin, after a post in a medium by a former intern at SpaceX.

But this rumor was shut down after he revealed owning 0.25 Bitcoin that one of his friends gifted.

In January 2018, Musk announced that his Boring Company would start selling a $600 flamethrower to fund its upcoming projects. Also through his twitter account, he tweeted, “But wait, there’s more: the flamethrower is sentient, the safe word is “cryptocurrency” and it comes with a free Blockchain.”

Musk has been known for his Sci-fi references and twitter jokes. Also, he has been seen passing sarcasm comments and joking about the cryptocurrency. However, there has been no further confirmation and on how Blockchain benefits into his flamethrower.

Despite him owning zero cryptocurrencies, people are optimistic about of Musk creating his own digital token that will be used in his Tesla and SpaceX. This need not be understood that he doesn't believe in Blockchain technology and cryptocurrency as a whole, as his next move in those sectors is yet to be discovered.

Charles Koch, chairman, and CEO of Koch industries is worth $60B. Similarly, David Koch shares majority control of Koch industries and worth $60B. Their father, Fred Koch started a business for improving the methods of refining heavy oil into gasoline. Koch Industries owns a revenue from business including pipelines, chemicals, Dixie cups, Brawny paper towels and Stainmaster carpets.

David Koch warns the investors not to invest in things they don't understand. He further adds, cryptocurrencies like Bitcoin may be a new technology but the investment bubbles are not and supports his statement why caution is required.

Larry Ellison, chairman, and co-founder of software firm Oracle is worth $58.5B. Apart from this, he is also a part of Redwood City, Indian Wells tennis event and real estate including Hawaii’s Lanai Island.

He is concerned about Blockchain being only used in the context of Bitcoin or other digital currencies. Additionally, he is optimistic about the rise of companies outside finance using Blockchain and believes that this technology will soon replace long-held authentication practices in law, real estate and shipping.

Oracle, the software giant has been optimistic about Blockchain, Bitcoin, and cryptocurrencies and embraced well in their company. Oracle is pushing its own cloud Oracle technology using the Blockchain technology to enable customers to share data securely both inside and beyond Oracle’s own cloud ecosystem. It's a way for large Oracle customers to link their existing inventory and supply chain software. Since distributed computing requires distributed computing resources, it has been pushing its own cloud as a competitor to Amazon web services and Microsoft Azure in the market.

According to a report by Bloomberg, Oracle is all set to unveil its Blockchain including a platform as a service (PaaS) Blockchain product.

There have been many research works being undertaken on Blockchain and cryptocurrencies. With the increase in investment funding and implementation of this technology by governments, we can certainly expect the involvement of a lot of investors and billionaires in Blockchain technology and its potential use cases in future days.