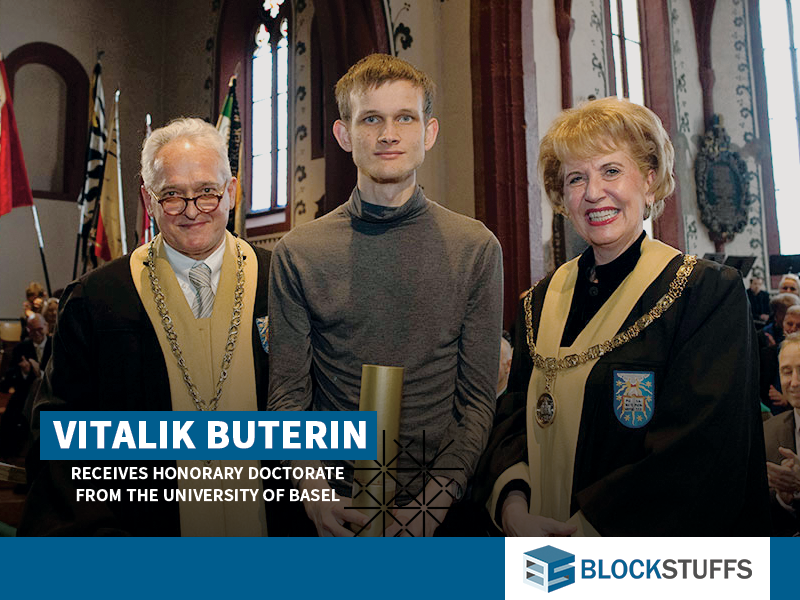 The University of Basel has granted an honorary doctorate to Vitalik Buterin, co-founder of Ethereuem for his contribution in building the Ethereum network.

The University of Basel has granted an honorary doctorate to Vitalik Buterin, co-founder of Ethereuem for his contribution in building the Ethereum network.

Dr. Buterin was awarded by the Faculty of Business and Economics of Switzerland’s oldest university for “outstanding achievements in the field of cryptocurrencies, smart contract and the institutions” in a recent tweet on its official account.

According to the official statement on the University of Basel university’s website, the honorary degree was granted during the university’s annual celebration “Dies academics” by dean Aleksander Berentsen, Professor of Economic Theory and Dean of the Faculty of Business and Economic. He stated:

“Vitalik’s blockchain innovations are game-changing. He has blazed a trail for science and industry to follow and work together.”

Ethereum, a next-generation Smart Contract & Decentralized application Platform was published in 2015 when Vitalik was just 19 years old. This article turned to be the groundbreaking for the decentralization of software applications, the faculty noted.

Vitalik dropped out from the University of Waterloo to pursue his dreams in the technology. His research article was posted without any academic degree and without any connection to any university.

Ethereum, launched in 2015 is a major cryptocurrency as well as a platform that features smart contracts for providing a basis for decentralized applications (DApps). It is among the major altcoins that rank in the third in terms of market capitalization. At the present time, it is trading at $112.72 according to the CoinMarketCap.

Besides, the notice of the University of Basel in taking the notice of Buterin’s work in the blockchain, the Ethereum platform is ongoing through a number of upgrades for medium-term scaling as well. Recently, Plasma is being used for addressing the scaling issues which is near completion. Apart from this, he has contributed a lot in the blockchain technologies such as consensus protocols, Plasma, and Casper.

This is a very inspiring act by one of the oldest Swiss University could be considered to bring as a new revolution in the crypto and blockchain market. Let's hope in future brilliant mind like him to be involved in blockchain and cryptocurrency enthusiast to be involved in the blockchain technology.

What are your thoughts on the Vitalik receiving an Honorary doctorate for his contributions to the blockchain, cryptocurrencies and smart contract? Let us know in the comment section below.