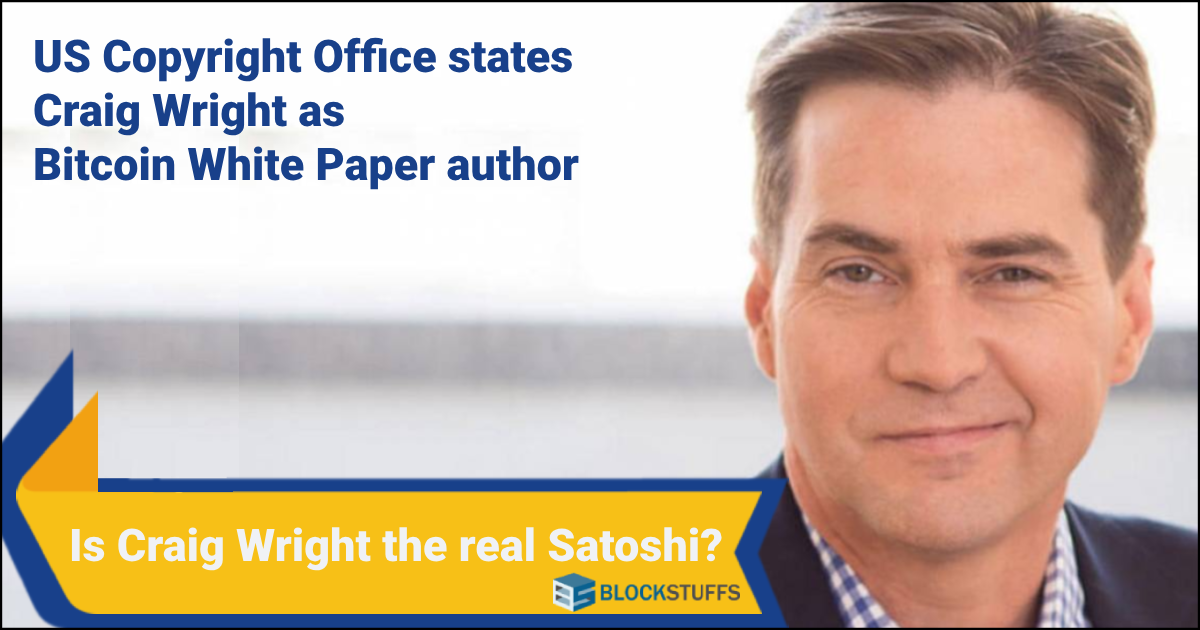 The US Copyright Office shows Wright as the author of Bitcoin whitepaper and most of the original Bitcoin code (version 0.1) used to build Bitcoin.

Craig Steven Wright has been granted US copyright registrations for Bitcoin (BTC) authored by Satoshi Nakamoto.

The US Copyright Office shows Wright as the author of Bitcoin whitepaper and most of the original Bitcoin code (version 0.1) used to build Bitcoin. This is the first government agency to recognize Wright as the main creator behind the code published in 2009.

The news was initially published by CoinGeek which reports that the US copyright Office received “confirmation from Wright that he is Satoshi Nakamoto”. The CoinGeek publication is owned by Calvin Ayre who happens to be a very good friend of Wright.

After the confirmation from Wright, the Copyright Office granted the following restrictions:

The copyright office is responsible for, “administering a complex and dynamic set of laws, which include registration, the recordation of title and licenses, a number of statutory licensing provisions, and other aspects of the 1976 Copyright Act and the 1998 Digital Millennium Copyright Act.”

Who is Craig Wright?

Craig Wright is an Australian entrepreneur, currently working as Chief Scientist of nChain, the global leader in advisory, research, and development of blockchain technologies. Wright created Bitcoin Satoshi Vision which is an attempt to restore Bitcoin’s original protocol. Through nchain, Wright aims to massively adopt Bitcoin in the form of Bitcoin SV (Satoshi Vision).

BSV came into existence since last November as a fork of Bitcoin Cash.

Craig Wright first claimed to be Satoshi in 2015. Since then, he has been trying hard to prove himself as a real Satoshi. In 2016, he tweeted about being the real Satoshi Nakamoto, however, he couldn't back up his statement with adequate evidence. Later, he clarified that he didn't have the courage to prove his identity.

Is Craig Wright the real Satoshi?

The registration still needs to be signed off on the validity of Wright’s claims, however, this is not a definitive proof that he is indeed Satoshi or the creator of the Bitcoin code. Despite the registration, the Bitcoin address of Nakamoto is still not confirmed to be owned by Wright.

Meanwhile, the crypto community, as well as media outlets, have huge doubts about its validity. Also, numerous giants of bitcoin industry have slammed Wright as a “Fraud” and have labeled him as “Faketoshi.”

On the other hand, people who believed in Wright have been celebrating on Social Media.

Jimmy Nguyen, founder of nChain, who also happens to be Wright’s boss said,

“We are thrilled to see Craig Wright recognized as author of the landmark Bitcoin white paper and early code. ”Better than anyone else, Craig understands that Bitcoin was created be a massively scaled blockchain to power the world’s electronic cash for billions of people to use, and be the global data ledger for the biggest enterprise applications.”

Do you think Craig Wright is the real Satoshi? Does recognition from US Copyright Office recognization provide enough proof? Or is this a adverting campaign to boost BSV’s price?

What do you think? Do let us know in the comment section below.