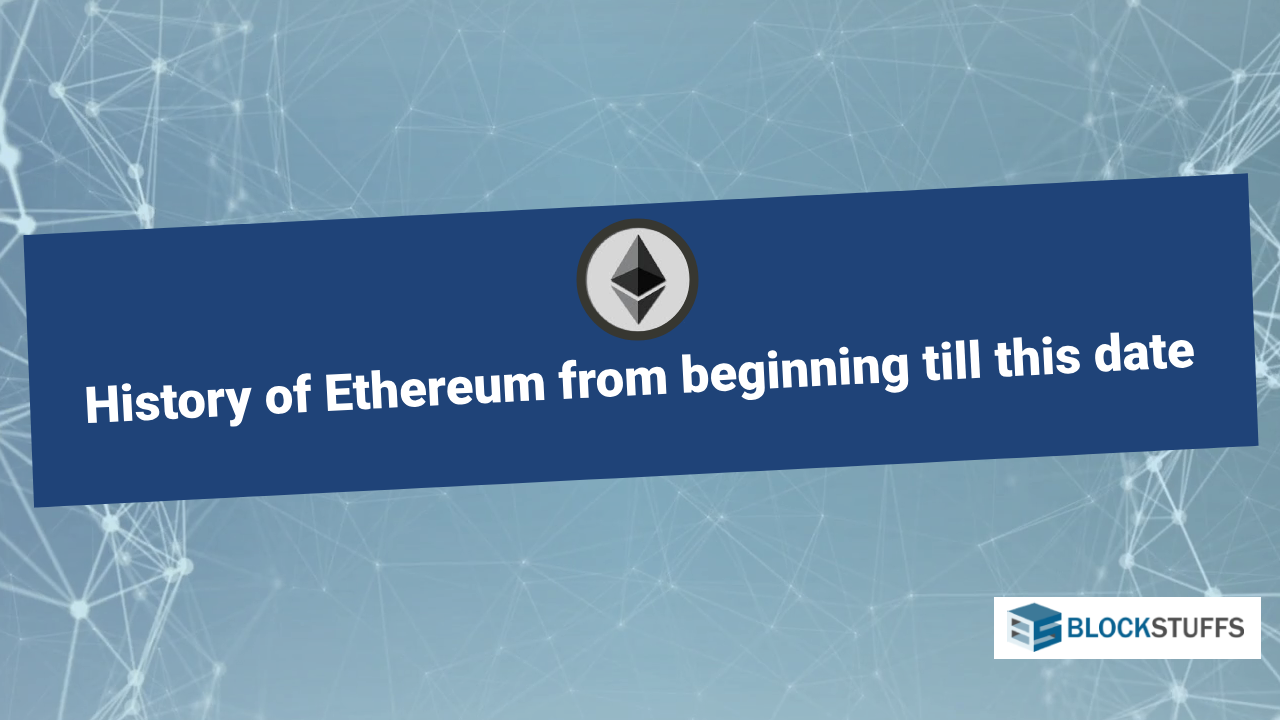 History of Ethereum from beginning

This article discusses the brief history of Ethereum’s journey from the beginning to being one of the most powerful and largest cryptocurrency networks after Bitcoin.

This article discusses the brief history of Ethereum’s journey from the beginning to being one of the most powerful and largest cryptocurrency networks after Bitcoin.

Ethereum is a decentralized system who took the technology behind the Bitcoin and expanded its capabilities. It is a whole network having its own internet browser, coding language, and payment system. It pioneered the concept of smart contract, complex legal and financial applications which led a foundation for the numerous other cryptocurrencies for easy development and deployment. It also supports its own cryptocurrency, Ether. Ethereum operates with a common goal of storing data, transfer and keep track of complex financial transactions and instruments.

Before Ethereum, building the blockchain applications required a complex background in coding, cryptography, mathematics along with other resources. Ethereum provided developers with the tools to build decentralized applications that run on blockchain technology.

Ethereum was initially coined in late 2013 by a 19-year-old programmer, Vitalik Buterian, (Now Dr. Vitalik Buterian).  He was constantly researching about the Bitcoin and its underlying Blockchain technology. Being actively involved in the Bitcoin community, the white paper was indeed the showcase of the result of his research and hard work.

Shortly thereafter, Vitalik published the Ethereum white paper containing all the aspects of the Ethereum protocol and smart contracts architecture. The original development team of Ethereum consisted of Vitalik Buterin, Mihai Alisie, Anthony Di Iorio, and Charles Hoskinson. However, Ethereum was formally announced at the North American Bitcoin Conference in Florida, USA in January 2014. Vitalik also announced his collaboration with Dr. Gavin Wood and Jeffrey Wilcke as the new co-founders of Ethereum.

By April 2014, Gavin published the Ethereum Yellow paper that served as a technical specification for the Ethereum Virtual Machine (EVM).

The specification provided by the Yellow paper resulted in better development of the software. The Ethereum Clients were able to implement its open-source code into seven programming languages including C++, Go, Python, Java, JavaScript, Haskell, Rust.

The Launch of Ether

For the fundamental operation of Ethereum, development of new cryptocurrency was planned which required the development funding. Instead of approaching the venture capitalists, Ethereum team decided to reach out in the cryptocurrency community in a crowdsale.

The presale of the cryptocurrency, Ether stimulated the large network of developers, miners, investors and other stakeholders. The crowdsale ran for two months starting from July 2014 and allowed future users and investors to purchase Ether in exchange for Bitcoin. The popularity of Bitcoin was quite large of which the Ethereum team used it for trading with the Bitcoin, this was initially used to cover the development costs and payback the mounting legal debts.

The Ethereum crowdsale was a huge success where 11.9 million Ethereum tokens were sold which was 13% of the circulating supply.

The crowdsale helped to raise about 18.4 million USD. The presale of Ethereum was very successful which is considered a great step for bringing forward the Ethereum.

After the success of ether presale, Ethereum development was formalized under a Switzerland based non-profit organization called ETH DEV along with Vitalik Buterin, Gavin Wood and Jeffrey Wilcke as the directors of the organization.

The interest of Ethereum grew steadily throughout 2014. The ETH DEV team was also able to deliver a series of proof-of-concept (POC) releases for the evaluation of the development community. Their frequent post on the Ethereum Blog also kept the excitement alive among the public. The huge traffic and user-base on Ethereum forum, Ethereum subreddit verified the fast-growth of the platform among the devoted developer community. This trend is still continuing till date.

In October 2014, five ETH was given for the creation of every block mined as per the Ethereum protocols.

In 24th November 2014, ETH developers organized the DEVCON-0 event for five days which brought together Ethereum developers from all around the world to Berlin in order to meet and discuss the diverse range of Ethereum topics. There were several presentations and sessions at DEVcon-0 which brought important initiatives that increased the reliability, security, and scalability of Ethereum. The event highlighted the need for DApps, its creation and architecture updates, secure documentation of DApps along with the vision of Ethereum and limitless possibilities of the blockchain.  This event overall galvanized developers to work towards the faster launch of Ethereum.

In April 2015, DEVgrant programme was organized that offered funding for the contribution for both Ethereum platform and Ethereum based projects. This program served to reward and support the developers who were contributing and thinking to Ethereum projects as well as in the open source. The programs aim to improve the Ethereum's existing open source libraries.

Security of the Platform|Release of Ethereum Testnet

The issues related to the security and scalability of Ether started emerging in late 2014. Then, the security audit of Ethereum began at the end of 2014 and continued until the first half of 2015. During this phase, multiple third-party software security firms engaged with Ethereum to conduct audits of all components such as Ethereum VM, networking, Proof of Work). The security issues uncovered by the audits were tested and addressed again that led to the development of a more secure platform

A series of development of proof of concept was released throughout 2014 and 2015 that led to the launch of 9th POC open testnet, called Olympic which was officially announced in May 2015. After its release, different development community were invited to test the limitations or the error in the network. The individuals who were able to break into the system were offered with suitable rewards.

Similarly, Ethereum Bounty program was launched in early 2015 where Bitcoin was given as a reward for finding the vulnerabilities in any part of the software. This step contributed to gaining the confidence of the Ethereum community in the technology. The program is still actively running to strengthen the system.

A release of Initial version of Ethereum-Frontier

The Ethereum Frontier network, an initial version of Ethereum was launched on July 2015. This version supported the trading of Ethereum, Ethereum mining, building and testing of the Ethereum smart contracts which provided the bare-bones to the Ethereum functionality.

Frontier was initially a milestone of the Ethereum network which even though was intended to be the beta version, however, turned out to be more capable and reliable than expected. That’s why developers rushed to build the solutions to improve the Ethereum ecosystem. The developers then started writing the smart contracts and decentralized apps in order to deploy on the live Ethereum network.

Homestead, the first stable version of Ethereum was released on March 2016. This planned protocol upgrade happened on the block 1,150,000. This version was released when developers officially classified the platform as “safe” after the improvements were visible in the previous network. It also had few protocols and networking changes included that made future upgrades possible.

Ethereum was initially funded by crowdsale on the Bitcoin network where Ether was offered to the users in exchange for Bitcoin. Ethereum introduced the smart contract platform,it's no surprise to see Ethereum to host the crowdsale.

Similarly, the first Ethereum Initial Coin Offering(ICO) was done for the Augur cryptocurrency. The first cryptocurrency ICO was launched in 17th August 2015 and continued until 5th of September of that year during which more than five million was raised for the development of Augur. Augur projects aimed at decentralization of speculation on the financial market by cutting down the middleman.

One of the important applications of blockchain was the creation of Decentralized Anonymous Organization(DAO) which described the operation and management of the organization. In May 2016, Ethereum was successfully able to raise a record of $150 million in the crowdsale. This received considerable media coverage and was indeed a great boost for the Ethereum.

The DAO code had a flaw in it namely “recursive call” bug that allowed users of a smart contract to withdraw twice much as Ether they have invested on. Though this issue was denied by DAO with the release of the statement. Unfortunately, it got hacked in June 2016, where unknown attacker exploited its vulnerability and withdrew 50 million USD of Ether which was 15% of all the Ether at that time.

This hack caused a major discussion among the crypto-enthusiasts trying to fix the issues and refund back. There was also an anonymous letter which is considered to be of attacker claiming that the hacked ether was completely legal based on the self-enforcing and self-contained of smart contract. As any action within a smart contract is perfectly legal under the terms of the smart contract.

As a part of refunding the money to put into the DAO, “hard Fork” was implemented. This led all the Ether to move from the DAO and the child DAO accounts into a “refund contract” account that allowed all the affected users to withdraw their original investment.

This unplanned split created a lot of conflict in the Ethereum network, yet both of the blockchains has remained divergent and are running as two different cryptocurrencies.

Ethereum implemented the Tangerine Whistle hard fork on Ethereum block 2,463,000 in October 2016. This fork was done to increase the gas price of certain operations in order to reflect its complexity. Before its implementation, the gas price on some operations was too low which was used to launch Denial of service attacks against the Ethereum network. Although this wouldn't make another Denial of Service attack impossible, yet made it more expensive for an attacker.

Ethereum blockchain experienced its another hard fork in November 2016 on block 2,675,000. The implementation of Tangerine Whistle didn't stop the attackers. There were different  attack methods used to mess with the Ethereum Blockchain. With the motive of slowing down the blockchain, attackers added multiple empty accounts. The main goal of Spurious Dragon hard fork was to debloat the blockchain by removing the empty accounts from the Virtual Machine whenever there were any transactions related to those accounts.

In February 2017, Microsoft and other major technologies and banks announced the alliance to adopt the Ethereum blockchain technology as the Enterprise Ethereum Alliance. There are many new high profile companies and clients which has joined the Alliance since its release. By July 2017, 150 members were there in the alliance which included MasterCard, Cisco Systems, Toyota Research Institute and many more.

Metropolis is the third phase of the Ethereum development roadmap. Due to its huge size, it has been divided into two stages: Byzantium and Constantinople.

Byzantium was implemented on Ethereum block 4,370,000 on October 2017. There were major improvements of other things, among which the introduction of zkSNARKS, delay of “time bomb”, implementation of early Proof of stake, transaction status receipt and smart contract upgrades are the most important ones. Nine Ethereum improvement Proposals (EIPs) are included with Byzantium hard fork.

It is the second half of the Ethereum’s Metropolis update. Although it was supposed to update on October 2017, the developers decided to delay the Constantinople until January 2019. The upcoming Constantinople include five different Ethereum Improvements (EIPs) for smooth transaction from POW to POS. After this version is released the backward compatibility is prevented completely, any node that doesn't update synchronically will carry on running as a separate blockchain entity.

After the DAO hack, Ethereum is concerned more on its security. There are different updates and announcements to increase the efficiency of blockchain by a thousand times. Ethereum is beyond cryptocurrency, it is a platform for running smart contracts and developing Dapps. With all the outstanding contributions in the blockchain and crypto community, there are no signs of stopping of Ethereum. Its

Undoubtedly, It won't be a matter of surprise when crypto-enthusiasts correctly predict the future of Ethereum as it is looking bright right now.