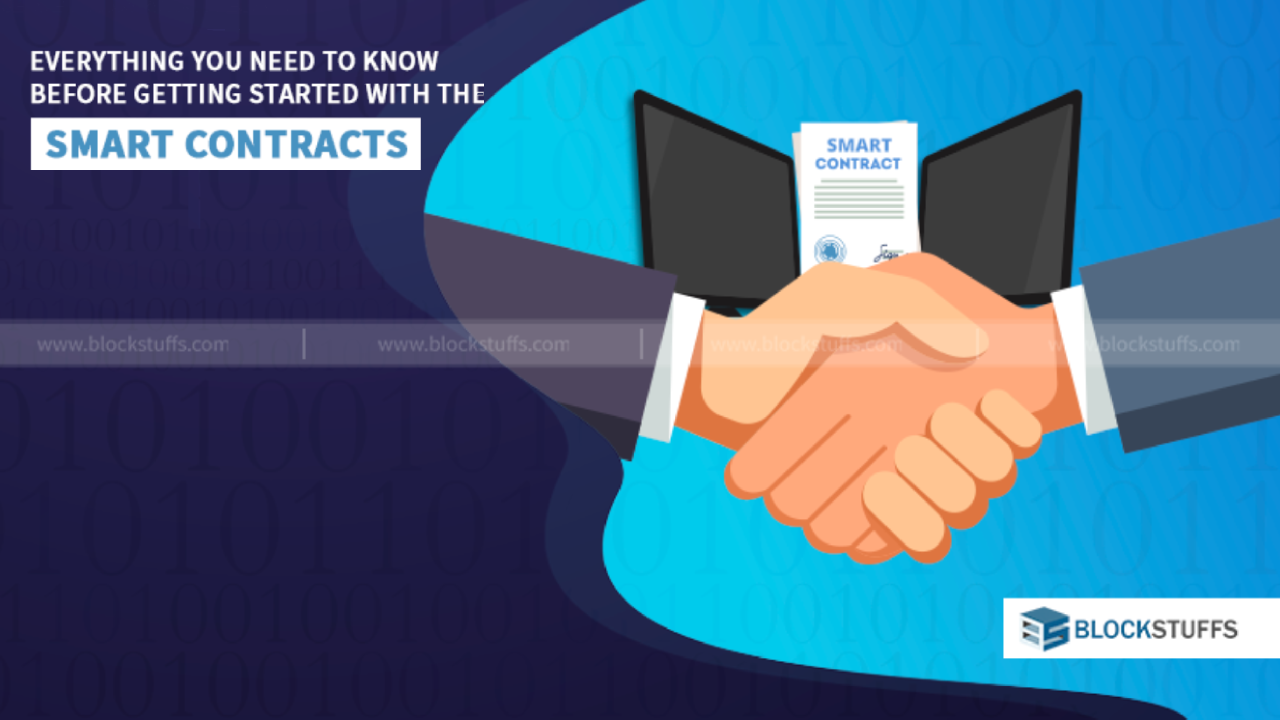 5 Things You Should Know Before Getting Started with Smart Contracts

This article focuses on providing a brief insight into smart contract so that it is easier to understand its purpose in the blockchain market.

There are many terminologies related to blockchain technology, and smart contract is undoubtedly one of the most common among them. But smart contracts can be confusing at first. This article focuses on providing a brief insight into smart contract so that it is easier to understand its purpose in the blockchain market.

Let’s get started with the overview, history, roles and responsibility, advantages and disadvantages of smart contract.

What are smart contracts?

Smart contracts are the lines of code that run on the top of Ethereum blockchain technology. Smart contract consists of terms and condition which is similar to the conventional contract but is written in terms of code. If these predefined rules are met, agreements are enforced automatically.

The smart contract makes it easy for the exchange of money, property, and shares without the need for the middleman. A smart contract is also known as Crypto Contract. They are highly beneficial for enforcing a certain type of agreement where all the participants are well-known about the outcome. This is highly applicable for business collaborations.

Smart Contract was first coined in 1993 by Nick Szabo, a legal scholar, and a cryptographer. Ten years before the invention of Bitcoin, he initiated a virtual currency called Bit Gold in 1998, which had almost many features as Bitcoin, yet was never executed. He was also rumored to be the real Satoshi Nakamoto, the anonymous creator of bitcoin but he denied the rumors.

Szabo stated concept as “A set of promises, specified in the digital form, including protocols within which the parties perform on the other promises.”

Back in time, there was only a little activity in the smart contract due to the lack of support from the digital platform or distributed ledger. The main goal of smart contract was to improve the observability, verifiability, privity, and enforceability of a contract.

Smart contracts are gaining a lot of popularity recently. With the growing adoption of bitcoin and blockchain technologies, many platforms now use smart contract including Ethereum, side chains, and Nxt.

What do smart contracts do?

A smart contract is the self-executing set of rules and penalties that binds the anonymous parties to have an agreement through the lines of codes. This code exists across a decentralized blockchain network. It works similar to the traditional contracts avoiding the additional hassle of needing a lawyer or a notary, paying them with a commission, fees to compensate for their work and wait for a legal document.

The contract is stored on blockchain where all the necessary identity pre-exists because of which the need for verification is abolished. The transfer could be automatic as the transaction are stored online and could be verified every time. This contract ensures the traceable, transparent and irreversible transactions by avoiding the need of the central authority, legal system or external mechanism.

What are the benefits of smart contracts?

Smart contract reduces the manual processing of any sort of paperwork, which simply increases the speed of the transaction.

Smart contracts are executed automatically after the terms and conditions are met. Here all the agreements are validated and verified through the lines of the code. This eradicates the need to rely on a broker, lawyer or any intermediaries to validate the agreement.

Smart contract terminates the need for notaries, estate agents, advisors, assistance, and many other third parties. All their fees associated to compensate their service can save a lot of money.

Smart contract is protected with complex cryptography which is extremely difficult to hack if executed correctly. An individual record is connected to prior records, so the whole chains are changed if any records are altered.

Smart contract stores all the transaction details in a secured and transparent ledger. Because of this, trust between the unknown parties is established.

What are the disadvantages of Smart Contract?

Smart Contracts are not perfect either. Let’s find out some of its disadvantages:

As stated earlier, smart contracts are the computer programs which are written by humans. If any kinds of loopholes are found in the code then hackers might exploit the error and steal the cryptocurrency like happened during the DAO attack.

Smart contracts do not have any regulating bodies. So, they are extremely difficult to monitor the global economy.

Smart contracts can be very complex for implementation. An experienced blockchain developer who can adopt the internal structure of the company is needed.

Therefore, Smart contracts can overcome a lot of limitations and eliminate extravagant expenses, however, this entirely depends on how developers write the code.